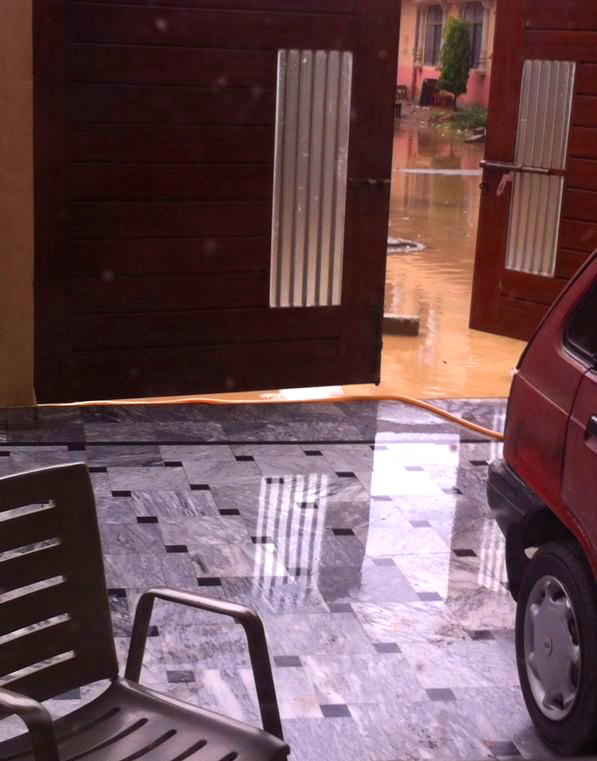 The summer season in Lahore is a mixed bag of tricks. The mangoes, lawn prints and sunny days are counteracted by intense heat and an anxious eye on the UPS/generator. Naturally a rainy day amidst such a dry spell is met with jubilation. However, when the downpour continues, the city of Lahore becomes the city of Chaos.

Roads are flooded, underpasses are closed down and diversions are created. These offshoots become clogged with wayward traffic and the bustling city slows down to a crawl. When the rain finally ceases, low lying areas, parks and green belts still house murky pools of water – a breeding ground for disease which isn’t going anywhere fast.

One may question why the blessed rain turns into an unmitigated disaster – it is a question seldom uttered aloud simply because it is one of the obvious kinds. Lahore is ill-equipped to handle precipitation i.e. storm water runoff. Rainwater absorbs toxins from the atmosphere, falls to the surface, leeches nutrients from the soil and displaces roadside debris before finding a channel to flow through. Eventually, it reaches a collection point. What was once the great river Ravi, is now a point of no return for untreated, urban waste.

Lahore relies on combined sewer systems which carry sewage and storm water within the same pipe. The size of the pipe is determined based on size of the population being served, commercial and industrial runoff, peak flows and precipitation flows.

Well, somebody needs to recalculate things. The population has increased and Lahore has developed significantly in the last two decades (overhead bridges galore).

The channels for the water are mostly ‘open’ which is obvious whenever you’re on the Canal road or in a housing society with deep running wells bordered by green belts. Creating a network of open channels may be convenient but it looks bad and smells like it too. According to an architect at AmerAdnan, combined sewer systems are no longer used in newer developments because of the water pollution they cause.

If citizens are being denied proper sanitation and waste disposal (a basic right) then it shouldn’t be for lack of awareness. Developed countries have separate pipe systems for sewage and storm water. The collection points of each are also distinct. Storm water is collected in catchments formed by natural depressions in the land, released into water bodies or ideally harvested (collected and reused for irrigation purposes).

Sewage is collected and sent to treatment facilities, where harmful chemicals, bacteria and waste material are removed. The sludge is reused as compost, and the treated water is released into nearby rivers or the sea.

Such a redevelopment (separating the pipes) is not always possible because of the alarming cost it presents. However, Pakistan is home to some of the world’s brightest minds – surely they can not only think of, but manage to implement several less expensive alternatives.

Those that have proven to be effective are CSO (combined sewer overflow) storage facilities, as well as retention basins. The former is a tunnel that stores combined sewage from several outfalls for a limited time period, without treating it. Once the storm is over, the water is released into a treatment facility. CSO’s effectively reduce the load on pipes during rainy seasons.

Retention basins are large, concrete tanks with various levels for treating sewage. The compartments within the tank retain various types of waste material (oil, debris, organic waste), before the water is released into a natural water body. The whole process takes about half an hour – the water is never stagnant within the basin, hence eliminating any chance of it becoming septic.

A city is a breathing organism, with various aspects that govern how well it functions. It hosts a plethora of citizens, all trying to get ahead or make ends meet. If any portion of it is neglected or ignored, it’ll fall sick. And like an infection, the illness will spread. Treat the source and everything else will improve accordingly.

It may be a long time before a problem of such magnitude is addressed. Here’s hoping the next time it rains, locals look at the pools forming with an awareness of how things should be, rather than what they are. Idealism trumps ignorance, always.